Cape Horn was that geographic point in this voyage from where the restoration of warmth was theoretically supposed to begin. But it was only in March when the boat was sailing through the Indian Ocean that the change became apparent. It was as if we traded all the latitudes on the same day because temperatures shot up almost overnight from a pleasant 20 degrees to an Indian 30 degrees. Sailing through similar latitudes in November last year I had taken the boots and sleeping bag and winter gear out so that they could be sunned before putting them to use, and now I am sunning them again so that I can pack them for good. Clothing has reduced to bare essentials and bathing has become a necessity from being a luxury. Following the tune of the reverse march, the sun shines brighter and deeper though days have shortened causing oils, chocolate, butter and dates to thaw and honey to flow more freely. Twilights are no longer the lingering inky blue affair they used to be in the Southern Ocean and the last of the albatross too stopped following the wake of the boat on the day when flying fish announced their appearance. In the Southern Ocean the invisible hand of drizzle, fog and dew would incessantly clean the deck and all metal fittings but in these latitudes that invisible hand no more follows the boat and the cold of steel is replaced by a white armour of salt encasing the hull making everything powdery and sticky to the touch. Going by the unwavering certainty with which this change has been happening, it would be quite logical if all the items in the boat that had found their way in to the floorboard in the Southern Ocean rearranged themselves automatically into their assigned shelves and drawers and if the dragonflies that have long been dead on the navigators desk woke up as if from a slumber and just flew away.
When the boat entered the Indian Ocean on 19th of February, the first navigational challenge that presented itself was the negotiation of the the Mascarene High which gave strong headwinds on a direct course from Cape of Good Hope to Mauritius. The other option was to sail as far East as possible sticking to latitudes lower than 35 degrees South until we hit the trade winds and made quick downwind leg till the doldrums. In the absence of a genoa the east bound leg had been slower than expected. We finally did a sharp left turn at 54 degrees East on the 3rd of March and made rendezvous with strong trade winds that carried us north at a scudding pace making us forget the loss of the genoa.


But its shreds managed to cling to the mast and fluttered in gale force winds with such rapidity that it almost gave the sound of an approaching aircraft. Between the 19th of February till the 6th of March I attempted almost 10-12 mast climbs to clear the shreds piece by piece with a pair of scissors. Finally when the winds abated in the early morning of the 6th I climbed the mast thrice by night before the genoa gave up and let go of its grip on the mast. Although that had been a big relief, it left me tired and reminded of the fact that my legs no longer retained the same strength they had set off with a little more than four months ago. 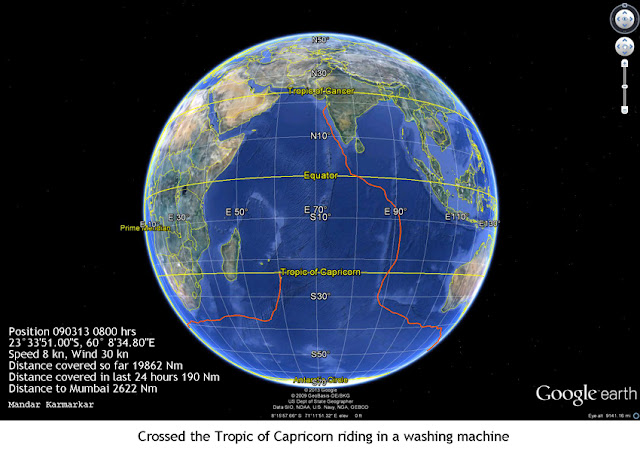 We crossed the Tropic of Capricorn for the second time in this voyage on the 9th of March- a date that was sandwiched between Women’s Day and Mahashivrathri. It was blowing a gale and the tight reach I was sailing made it look as if we had been cast off into a washing machine. As we approached the Mascarene Islands from the south, a merchant vessel by the name Mol Distinction appeared on the AIS with a dangerously close CPA (Closest Point of Approach). After I raised her on radio and she promised to keep clear of me, the watchkeeper and I started a conversation that curiously began like this:

It took a while to clear the confusion but by the time the conversation was over, the Chinese seafarer who was on watch was in awe of the Indian Navy and the Mhadei’s voyage so far. I am sure that similar conversations would have happened before between other non stop circumnavigators and passing merchantmen but I can also say with much certainty that the number of such conversations would have not exceeded one hundred in the history of mankind.
Up Nest- Island hopping
PS. The International Women’s Day was a good day for me to remember the various women whose contributions have no doubt helped this voyage.
- Isobel Rodrigues who gifted a bottle of bora pickles just before I departed from Goa. Not only have they lasted this long into the voyage, they also are the most delicious snacks in the Indian Ocean right now.
- Urmimala and Tosha who helped me with graphic design work during all stages of the voyage.
- Meera Donde whose Herculean effort in diligently sorting and packing food for the voyage saved me days of effort on shore and a mess of disarray within the boat
- Neha Dara who has religiously tracked the voyage through her monthly articles in the National Geographic Traveller (India)
- Clea Chandmal who single-handedly organised a major part of my diet for the voyage. Particularly, the passage through the Southern Ocean would have been a different affair but for the energy bars she made herself
- Dr Harshada Rama because of whose foresight I carried enough ayurvedic tonics and medicines for the voyage that has kept me away from all ailments all through the voyage.
- Swapnali Dabugade who invented a program to take Sagarparikrama to schools and educated nearly 2500 students from over 15 schools through the efforts of the team she inspired.
Posted by Abhilash Tomy at 9:27 AM