The arrival at the end

I have never sailed in the monsoons. The aura that was built up by colleagues did cause a bit of an apprehension but I have rounded the Cape of Good Hope and it could not have been any worse. The pilots say that the winds rarely exceed 25 knots, which is good sailing conditions for us. And it was indeed pleasant sailing, because the warm waters of the Arabian sea never stung you in the occasional spray, and a squall infested sky kept the sun away. Winds touched 40 knots once in a squall, but besides that the squalls were benign. I worked out a very conservative sail configuration which maintained speed in light winds and weathered the occasional gust well. Closing in on land brought in more traffic too- my AIS display at times showed upto 11 ships in vicinity. I cut across the 8 and then the 9 degree channels through the Lakshadweep Islands. The boat gobbled up the distance between Goa and herself in a rhumb line course on the steady westerly breeze. Though I did sight a couple of lighthouses on the Lakshadweep Islands, my first landfall was on the morning of 3rd June, when I sighted the hills of south Goa and north Karnataka. The voyage was coming to an end and it was not very good news. Land has its allures but once you have been at sea alone and for so long, it loses its lure. I was asked to go alongside a warship at the naval jetty on Zuari River, where Adm Awati, Cdr Donde and Ratnakar were present to receive us with chilled Coke and warm pizza.

I thought that was the end of a rather pleasant, fast and incident free voyage, but there was excitement lying in wait. By the time I finished the pizza and come out of the warship, the swell had caused the Mhadei to rip apart most of her mooring lines. Realising that it would be unwise for her to be left there overnight, Cdr Donde advised me to shift her to her old mooning at Mandovi. The entrance to the river is shallow at most places and the channel is narrow. It becomes even more difficult in the monsoons when the swell breaks into rollers close to the entrance. It was not easy entering in those conditions but we somehow managed and it appeared for a while that the worst was behind me. But the decision to make an approach on the jetty with the wind behind me proved to be a costly one. The boat refused to stop even with significant reverse thrust and I had to make another approach. In the bargain one of the springs became entangled in the propeller, rendering the engine unusable. A RIB was soon despatched to tow us back but the winds were in command, pushing us to a shallow patch and eventually grounding us. Another RIB was despatched to help us out of the situation. I passed the anchor to her with the intention of heaving ourselves out but the anchor cable promptly got entangled. Both the RIBs continued their efforts for at least a couple of hours before she could be freed. It had been a long and tiring day.

Early in the morning, divers managed to free the propeller and a cursory inspection did not reveal any damage. It was with much relief that I attended the formal welcome arranged for us later that day by Capt Prakash.

The Mhadei now lies peacefully in her usual mooring at the Mandovi. We have finalised a work package for to prepare her for the bigger voyage. The second part of the refit will begin in a week or so and I am looking for a much needed vacation. 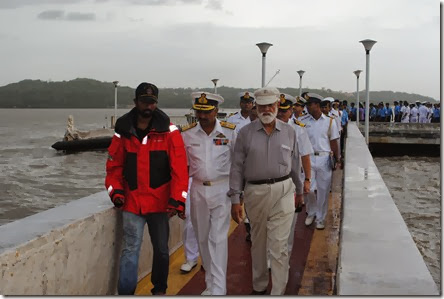