An Indian Legend Talks of a Circumambulation

I had a mail today from Admiral Awati  gently reminding me of an Indian legend that speaks of a circumambulation. And it did come on an opportune date. Here is what he wrote.

"Shiva ( Shankar ) and Parvati ( Gauri ) have two sons, Kartikeya, the Commander in Chief  of the Heavenly Hosts and Ganapati,  popular among the commoners as the harbinger of good things. When they were young and impressionable, there was a competition between the siblings for the affection of their father. Shiva called them together and told them, proceed on a circumambulation of the earth, the one who finishes first will claim my affection. No sooner he heard this filial injunction than the energetic Kartikeya launched himself on his exertions. He came home, panting, from his exertions only to find the languid Ganapati placidly sitting with a wry smile on his face. Kartikeya was amazed to see his brother there before him. Ganapati explained that while brother Kartikeya was rushing about like someone possessed, he, Ganapati, went round their mother, Gauri. Their mother was his world,. his earth. He had, therefore, completed the circumambulation of the earth long before Kartikeya did !

That is the story. The dictum, *AASAMUDRAPARYANTA PRITHVIH, though, is the reality.The earth can be circumambulated  ( circumnavigated ) only by sea."

* Citation needed. Will be glad if anyone can provide me with further details on this. A transliteration in Devnagri will be very much appreciated

Someone recently posed a question, “What does the term “Mhadei” mean?”
I knew the answer but then I thought I would leave it to someone who could explain it better.
Here is what Adm Awati had to say about it, in his own words. Read on… 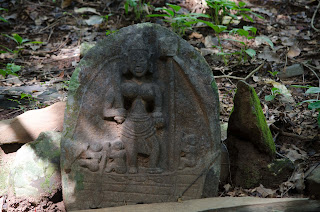 “In late 2008 as the boat was nearing completion, I looked, searched for a suitable name for her. Many names suggested themselves to me. I rejected them all as common or garden, not suitable for  a potential circumnavigator. I was looking for something really evocative. Then in August that year, as the Monsoon raged in Goa and Ratnakar busied himself painting the finished hull in the covered hangar where the boat was under construction, I was invited to Goa by my friend, Professor Pratima Kamat, who heads the department of history at the University of Goa. She had just then completed a book on the Kadamba rule in Gomantak, a thousand years earlier. She took me to theSattari region of Goa at the base of the Ghats in adjoining Karnataka where the Mandovi has her source. The infant stream descends into the Goa plains where the locals worship the river goddess. Here there are numerous temples to the goddess built out of the local black, basalt rock. In those temples there is that icon of the river goddess, also carved out of volcanic basalt, sitting cross legged in a boat which is carved in great detail, showing mast and sails, crew and sukkani with the disha-kak, the land finding birds, caged at the top of the mast ( hence the term crow's nest ), ready to be released on the approach of land. ' Admiral `, says, Pratima to me, ' here is Mhadei, the river goddess,the patron deity of the locals. Interestingly a similar cult of the river goddess exists at the other end of the country, in Odhisha `. I knew at once that my search for a name for our circumnavigator boat was at an end. She would be named MHADEI ! I told Dilip and Ratnakar of my decision and thanked Pratima for guiding me to her, here in Sattari.
Incidentally, the infant Mandovi, too is here called Mhadei. Her festival lasts ten days, annually, during the Navaratri, ends on the tenth day, Dashahara, Dassera in the common language. That is the story behind the name of the Indian circumnavigator boat built by Ratnakar Dandekar at his small, unassuming boat yard on the island of Divadi on the Mandovi river, off Goa Velha” 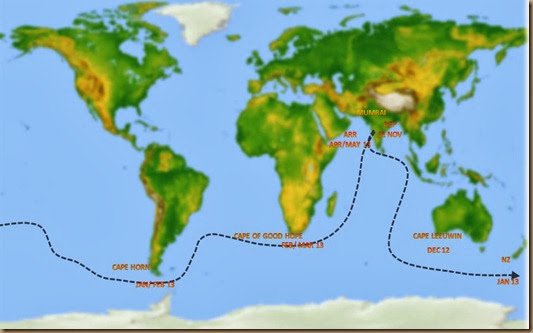 “What route would you be following?” is one of the most often asked questions and ideally I should have it included in the FAQs. But there was so much of writing to be done that I thought it needed an entire post to itself.
Whenever I have provided an explanation to the route most of the responses I got went something like this:-
- you don’t seem to be touching all the oceans
- but you are not going anywhere along the northern hemisphere
- you  are just going around the Antarctic and that looks like a very quick way of circumnavigating
Let me explain.
Circumnavigation of the globe simply means to go around the globe. Since this one is under sail, I am not allowed to use engine except in case of emergency. The canals are, therefore, out. So is the northern hemisphere because it is landlocked, in a manner of speaking.
In the south though, there is a continuous linkage between the oceans, which is navigable round the year. Due to its being unprotected, the sea continuously builds up and has given rise to the famous sailor’s adage- there are no rules south of 40 S, no laws south of 50 S and no god south of 60 S.
Sailors have generally agreed set of rules for a nautical circumnavigation. To paraphrase some of the important points include:-
- Start and finish in the same port
- Cross all longitudes in the same direction
- No use of propulsion other than wind and sea
- Cover a distance equal to 21600 miles (length of the Equator)
- Take no assistance enroute (sea can be harvested though)
- Cross the equator twice
- Start from a point no further south of 40 deg S lat
- Sail south of all the Great Capes: Leeuwin, Cape Horn and Cape of Good Hope

That doesn’t leave me with much choice and automatically excludes a lot of possible (and easy) routes, chief among them being a circumnavigation along the equator and through canals.
Possibly the only choice I have is to head East or West once I am out of doldrums. That isn’t really a choice if you were familiar with the weather systems in that area.
Posted by Abhilash Tomy at 8:51 AM No comments: 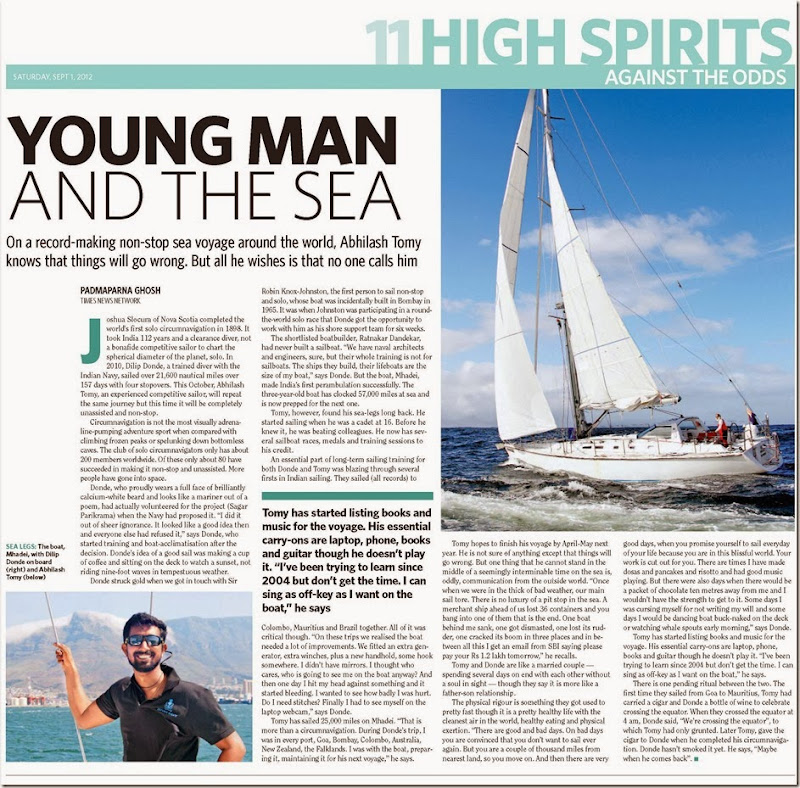