The Resurrection of Dragonflies


By the time we were on the throes of crossing the Equator for the second time the sea had undergone a metamorphosis: the youthful, inquisitive and godless ocean of the south had grown older, wiser and bored in these latitudes, its faith reaffirmed by the repetitive act of washing the shores of the land of a million deities. The reversal continued unabated in all manners and it was never more evident than when the dragonflies came to life on their own as if by an act of resurrection in the latitude of my grandfather's home much before it was Easter Sunday. I also deferred clearing the mess in the boat more out of deference to the evident display of the reversal of entropy with full faith in the ability of things to find their own way back into order.

The voyage continued on expected lines and I was greeted by light to moderate head winds that forced us to plough eastward toward the Maldivian Islands south of the Equator and then towards Socotra, Istanbul and Gwadar north of it. The continued trouble with water meant that I had to sail a fast course towards Mumbai eventually bringing my solitary existence to an early end. I would avoid working my body by day to conserve whatever fluids there were within it and plan all work, including tacking and working the sails, for the night. Water would be measured out to the millilitre to avoid wastage and I could not but help sympathise with the millions of farmers and housewives all over the world and their condition during droughts. In the evening of 31 March when I crossed the first set of buoys while entering the harbour of Mumbai I had so well succeeded in my endeavour at conservation that I was still left with two bottles of water.  But then even if the voyage had extended beyond that date, I had imagined a contraption comprising the pressure cooker and some plumbing to distill water out of the sea and continue on the voyage for as long as cooking gas lasted.

It was evening by the time I arrived at the outskirts of the harbour. A cruise ship was headed out with promises of dolphin sightings and a naval helicopter buzzed about me to take pictures of the last moments of the voyage. The exhilaration of entering our names into the history books was also diluted with the sadness that comes when good things come to an end, but then the latter feeling had been the more overpowering of the two because I had not set out to create a record or bring back a trophy but rather for the experience of it all. In the last one hundred and fifty days I had fallen in love with the sea and with the boat that had carried me around the globe whose portholes offered me a window seat view of the most magnificent and life like motion picture I would ever see in my life. It had been a most interesting voyage, one that was not undertaken alone but in the company of hibernating grasshoppers and dragonflies, curious whales and smiling dolphins, loyal albatrosses and even more loyal fans. We had happily dealt with the absence of a chopping board, the inquisitiveness of Sri Lankan fishermen, the death and resurrection of dragonflies, suicidal flying fish, bone chilling cold, ghost icebergs, foggy sunless months, the terror of land sightings, solitary human voices in the middle of the ocean, hallucinatory dreams, desiccating heat and come back to tell exaggerated tales of it all.

By the time I crossed my office building by the harbour, night had already fallen. Cdr Donde came out to greet us in an inflatable along with Ratnakar and Alam and other colleagues from the office, one of whom carried popcorn and chilled soft drinks. An hour after crossing the first set of buoys I had entered the naval dockyard and tied the boat alongside a warship where almost all the admirals and other senior officers of the command had gathered to witness the event. It had been a low key affair because it was not yet time to tell the world about my arrival. It was, therefore, not marked by cannonading gun salutes, parading military columns or dancing girls but by the popping of two champagne bottles, many warm hugs and two men in white uniforms steadying my wobbly sealegs with firm helping hands. One of them had been the C-in-C of the Western Naval Command, Vice Admiral Shekhar Sinha, who had seen me off exactly 150 days earlier at the Gateway of India. He proudly remarked, " You have turned geography into history. Very warm congratulations."

Another round of private celebrations continued on the boat with three cans of beer that had inadvertently gone around the world and pizza that came from our host ship. It lasted well into the next day until we abandoned the gathering because the hosts had run out of beer at the unearthly hour of 1 o'clock in the morning. It was only after I stepped on land proper, travelled in a non wind driven device, deposited myself in a firm bed inside a concrete room and switched on the air-conditioning that I finally understood that from now on I would have to live a life in concrete buildings among landlubbers whose language I had forgotten.

That was how the solo voyage around the world had come to an end with a resurrection on the Easter Sunday of the 31st of March followed by the first step on land on All Fool's Day on the 1st of April. For six days after Easter Sunday I moved about men in disguise and passed time getting my passport stamped, devouring raw fruits and vegetables, giving interviews as if I was still at sea, appearing suddenly in front of colleagues who had given me up for dead (or at least someone who had been forced to cross over to the other side of the world) and confusing online fans with misleading reports because an element of surprise had to be maintained till 6th of April when the President of India and Supreme Commander of the Armed Forces would come to accord a "ceremonial reception" to the skipper and boat. The ploy seemed to have worked well because on the 5th of April when Guo Chuan, the Chinese circumnavigator, entered Qingdao with his boat the international media thought that the Mhadei and skipper were still at sea and becalmed. I had a mail from Sir Robin warning me to clear the confusion and I promptly posted a picture of my stamped passport on the Facebook page of the boat to prove my arrival on the 31st of March.

I had been looking forward to spending the six days that intervened the actual arrival and the official reception because it would offer a gradual acclimatisation  into the world of landlubbers. But even by the 6th of April I had not let go of the sea within because I refused to find sleep without the lullaby of the boat's rolling or eat without the freedom to gulp the vast open seas and sea winds or drink water without the smell of diesel in it or urinate without seeing the width of half an ocean at my feet. I also realised that I had left a big part of myself at sea which was confirmed by the weighing scale at 11 kilos. In between the chaos of interviews I found the time to make a five minute short video along with a couple of friends with highlights on the voyage, accept an ring of gold from a fan for rounding the Horn and buy accessories for my new MacBook. It was a delightful experience to move about the sea of humanity that was Mumbai and watch everything about me as if it were a movie that would never get over. That was the kind of solitude and sense of detachment that I had felt even amongst people.

I was only too happy when the 6th of April finally arrived because here was my  last chance to sail solo for the last time for I was certain that after I would leave the helm it would need the efforts of an entire crew to keep her sailing even from coast to coast. We cast off before the sun was up and disappeared beyond the limits of harbour to hold a position to its south. In the light breeze I put the boat into the wind, had a hearty breakfast of fresh fruits, cleaned the toilet, showered, dried myself in the open and instinctively went off to sleep. It was such a delightful day off Mandva away from the cacophony of all sorts of calls and noises that I lost track of time as is the won't in a solitary existence and I refused to head towards the notional finish line off the Gateway of India for the same reason that I had set out on the circumnavigation. An immense array of sailboats had gathered to sail me in which included Major AK Singh of the Trishna fame who had been awarded a Kirti Chakra for his efforts to skipper her around the world on a crewed voyage with many stops years ago. By the time I was knocked back into my senses I had to push the throttle all the way forward and it had become increasingly difficult for the yatchs and dinghies to keep pace with the Mhadei. The boat and I finally crossed the finish line at the appointed time three hours after noon which was followed by an overhead flypast by the President of India in an Air Force Mi-8. Fifteen minutes later when I was mooring the Mhadei alongside a pontoon at the Gateway of India, the President had already taken his post under the monument along with the Governor of Maharashtra, the Chief of Naval Staff and the Flag Officer Commanding-in-Chief of the Western Naval Command. I marched up to him wearing a white tee shirt, blue jeans and red shoes to make report completion of the voyage. In reply he wore a happy and proud face and welcomed me ashore on behalf of the 1.2 billion people of India. 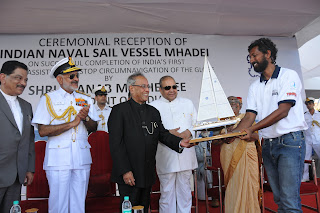 All Yours! The video that we put together while I lived in purgatory.

Next up- Life on Land