Of Garcia and a Bored Ocean

We crossed Diego Garcia on the 5th of December at night.  There were aircrafts flying about. The island was so much aglow with light, I wondered if global warming was put on a backburner ever since I left mainland India.

Earlier in the day we fuelled from Suvarna for the second time in this voyage. Wind has been so elusive  in this bored ocean that we have had no choice but to motor so far. There is nothing attractive about motoring barring the fact that it drowns the voice of my guitar when I play it on the deck in the evenings. Therefore, when the crew looks at me but can’t hear a single chord even when they strain, I look like a maestro and I am glad. I like holding the guitar and not play it because it reminds me of a woman’s waist I once caressed.

I must again thank Captain GP for supplying me with a fine selection of books- one from almost every continent and genre.  James Clavell’s “King Rat” was followed by Geza Gardonyi’s “Slave of the Huns” (“the national book of Hungary” – GP) and now I am on Homer’s Illiad (“because you are at sea and sailing” – GP).

After fuelling we were customarily invited by the Commanding Officer, Cdr Mundakkal, to the ship for ablutions and dining. The skipper wanted me to decide the order in which we were to leave for, he said, “you are the First Mate and adam (admin) is your concern.” I retorted with “I sure am the First Mate and I will make it a point to mate first. Therefore, it is Eve that concerns me and not adam”. We had a hearty laugh, the two of us who understood, and I let the skipper off first with Khajuria.  It took them two hours to get back and when it was my turn, the EXO invited me to his cabin for a shower. It was confusing because I did not know whether it was the cold water or the hot water that gave me more pleasure.  I dined with my coursemate, James John and spoke of old times and new, especially of a trip we made in 2000 to Rajasthan.

Posted by Abhilash Tomy at 1:49 AM No comments:

Crossing the Equator and All That

We crossed the Equator at 3 in the morning of the 3rd of December and opened a can of gulaab jamun.

A little while later we were ambushed by a bad squall, which was normal given my affinity for rains. The southern hemisphere officially began and hopefully the boat should do some better speed because its downslope all the way from here. Things might be upside down from now on and I might have to hold on to things to stop myself from falling off the boat.

The Equatorial sun is harsh. It has begun to leave a mess of rashes and boils on my body. The heat makes it impossible to keep awake during the day and dehydration adds to the nausea.

I look forward to the evenings which bring in beautiful sunsets and nights that bring about the phenomena of stars. A cursory look upwards at night and you are bound to be mesmerised by the billions of stars that people the night sky. There are so many constellations one can make out even if you are not a habitual stargazer, for the mind is inventive and imaginative. One of the crew discovered the constellation of the eye and another that of the umbrella.

When my turn came, I tried to look for one that signified accommodation for single officers in the navy. Needless to say, I failed. It has also become difficult to sleep on the deck because starlight impinges on my eyes even when they are closed and plays with my dreams. 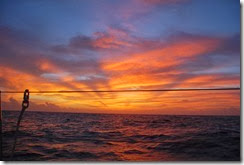 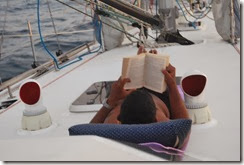