I was speaking of Cargodos with a friend and conversation veered to an island of our imagination’s construction which had three rocks, four palm trees, one sandy beach and a shipwreck. We were discussing the possibility of being marooned and three essential items that might be needed for survival. We both agreed to a knife and a lighter but she wasn’t sure of a blow up doll.  I then invented a flag made of palm leaves and asked her to represent the island in the UN. The conversation went downhill from there. A couple of evenings later, I had a dream which was as lucid as it can get when one is at sea. I was teaching fishermen to walk on water and gave them a demonstration. A while later I was teaching them to fly but did not succeed quite as well.

The Equator crossing happened in the early morning of the 28th. It was a frustrating affair. I had wanted to cross the equator well west but concerns of piracy forced me to sail much further east and I lost a day in the bargain.  I am much closer to Madivies than I had originally planned but I am keeping west of it against the advice to go further east. There is a system building in the Arabian Sea with winds topping at 50 knots and swell at 7 m. It is moving east and I want to be home before it hits me anywhere.

We are about 750 miles from Goa and I am planning to make an entry by the 2nd or 3rd of June. Soon after, the monsoons will hit India, as it is customary for rains to follow me.

Posted by Abhilash Tomy at 6:01 AM No comments:

The weather mellowed down a bit after the shaking that we got rounding the Cape. It was almost like living inside of an earthquake for a week with no respite in sight. On several occasions I was flung out of my bunk (which is on the windward) into the foot of the galley, and this was invariably followed with the navigator's seat falling on top of me. I grew wiser and rigged the lee cloth after which sleep has been much easier.

Though the weather eased a bit I lost two important equipment onboard. The wind vane autopilot’s paddle broke at a welding putting it out of commission. On the same day the generater refused to start. While attempting a repair it caught fire at the point where the battery terminals are connected. I quickly removed the cables. Later on the galley caught a minor fire, the reason for which turned out to be ill secured gas cylinders that had dislodged and were lying horizontal. To top it all, even my wrist watch stopped working- all on the same day.

After sixteen days of sailing, I sighted Reunion. Sighting land after so many days at sea is an indescribable feeling. I made every effort to pass close, and finally I left the island five miles on my starboard at midnight. Pity I could see only the night lights and much of the island was hidden because of the night. It was a full moon night and it helped a bit, and by the next afternoon I had sighted Mauritius. Mauritius has become a milestone in all trans Indian ocean passages. Cdr Donde’s training voyage was to Mauritius. He passed Mauritius on his solo circumnavigation. We again sighted the island on our way to Cape Town. It is almost a mid ocean pilgrimage spot.

I spent the night in the lee of Port Louis and in the morning closed in on the harbour to pick up a supply of fresh fruits from the Mauritius Coast Guard. Another day passed till the escort was ready to leave harbour and on the 19th we set sail from Mauritius resuming navigation to Goa. Koman flew a few sorties to escort me in and out, and with him were KKK and Bhatt. On the way out CGS Guardian accompanied me till Sudan Bank where they peeled off after a gift of fresh water and Indian sweets among other things. Another minor detour saw me at Corgados a day later and at Nazareth Banks after that.

The trade winds are in full sway. It is 20 knots from the south east more often than not, and it will remain so till half a degree south of the equator. I am yet to decide which longitude to cross the line but it seems most likely to be between 67 and 69 degrees east . And then its a home run. 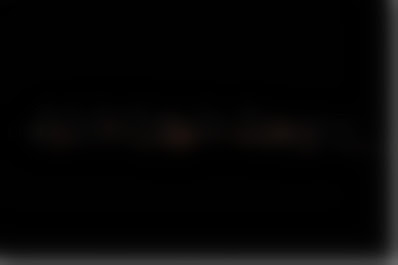 A receding view of Reunion by day 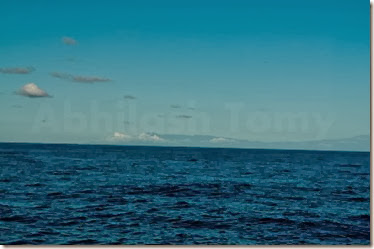 Friends dropped in to say hello! – Koman and KKK 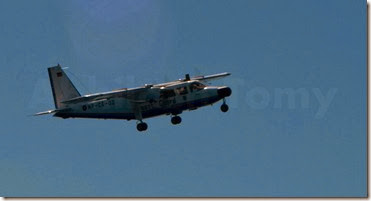 Made it to Mauritius in time to see this splendid moonrise 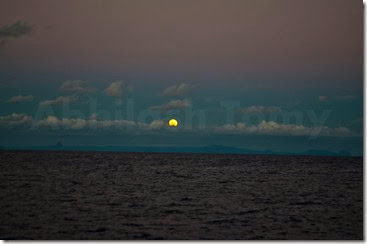 The island by day 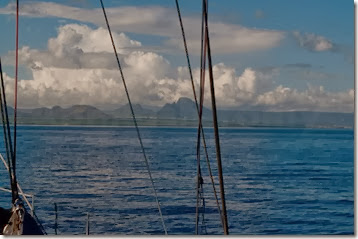 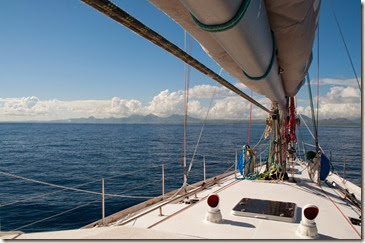 Koman pays a visit again- This time with Bhatt 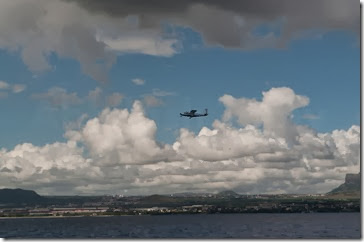 MCG with a supply of fresh fruits right outside Port Louis 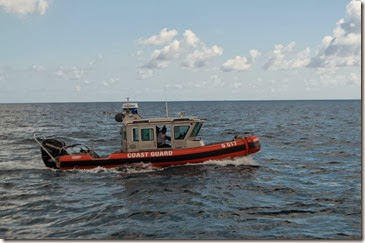 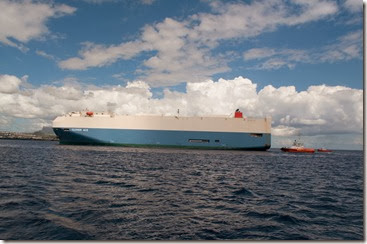 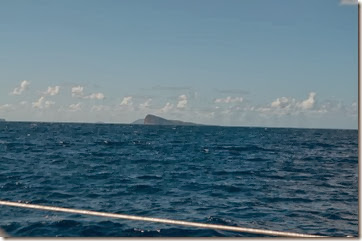 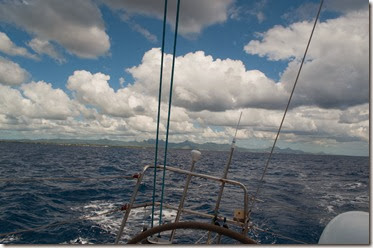 The Guardian of MCG as escort. Lt Cdr Athawle sent across a gift of Indian sweets and hot noodles before parting ways. 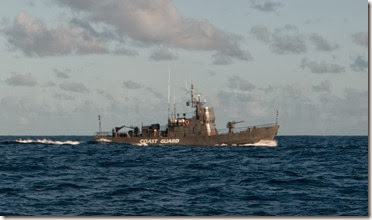 On the 28th of April, after a couple of tense hours on the RCYC slipway, the Mhadei was slipped out and taken out for trials to check her propeller pitch. That was followed by fuelling after which we returned to our usual mooring at the marina marking the end of a month of work that had gone into preparations for the return to India. We reserved the next day for rest and some final cleanship, settling accounts and such sundry work. Sudheesh, who had come from the High Commission at Pretoria helped with most of the work on the boat, almost as if he were crew.

On the last day of April, we were seen off by a small crowd of South African friends who had gathered to make sure I did not overstay. Fifteen minutes past the noon gun, with the help of Cdr Donde, we manoeuvred out of the marina and I set sail on a voyage that would cover nearly five and a half thousand miles. By the time I had crossed Sea Point, the sails were fully set for the mild south-easterly that was blowing. We had hardly sailed for a couple of hours before the south easterly went up from a breeze to a gale. I was busy taking in a couple of reefs when the wind indicators knocked off taking the autopilot with it. With all the shipping in and around the harbour, it was not an easy time. I worked on the connectors for a while and the instruments began to show some sign of life again. I sailed the entire night maintaining a distrust for the wind instruments, half awake and ready to get into action in case anything further went wrong. In Cdr Donde’s words “the instruments needed to grow sealegs.”

The strong south easterly helped us put distance between the Cape and us and we were well clear of the Agulhas bank within a day. Wind turned southerly and that helped us gather speed eastward. A swing back to south easterly saw me curve north eastward but then finally when the winds settled a few days later, I was tracking a great circle course to Mauritius. The first seven days of sailing were not easy, with the gale abating only for six hours to allow time for it to swing around and blow another gale. I used that minor interruption to change the genoa which had earlier torn in very mild wind conditions. Swell would more often than not range between three to four and half metres and winds would often shoot up to 40 knots. Cooking was as difficult as eating and I subsisted mostly on fresh fruits, bread and milk for the first couple of days.

It has been three days since the winds calmed. The boat did pretty well and got out of it more or less unscathed. The list of damages were mostly minor- a parted preventer which gave up in a crash tack, one lost easy stow batten and a little bit of water in the bilges. We did make some good speed though and put miles behind us at the rate of 180-200 miles a day.

That was how my first solo voyage began. 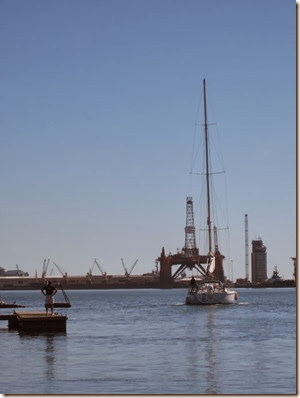 Cdr Donde looks on as we leave 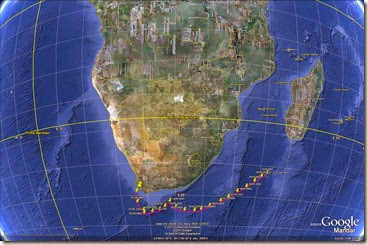 The voyage so far- Mandar has been tracking all the voyages of the Mhadei so far.

Posted by Abhilash Tomy at 8:07 AM No comments: