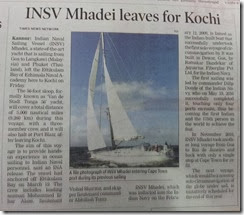 Posted by Abhilash Tomy at 10:17 AM No comments:

Another interesting stopover comes to an end. This time it will be remembered for all the wrong reasons.

I never liked stepping ashore but this time I did and what followed should keep me away from land for a while.

We arrived on Saturday after scudding along the coast at 9 knots on an A3. On Monday the right tire of the car punctured on Kundanoor bridge. On Tuesday it was the the turn of the left tire. By Wednesday it was time to change both punctured tires and on Thursday I got a parking ticket. The only amusing part of the entire affair was that when I walked into the police station to pay the fine, I received salutes and apologies! I dont know what Friday and Saturday have in store.

One of these days I had a sailor visit me demanding that I take him out sailing and that it would make him "indebted". Coming from someone who had already logged 8000 miles on this boat, I was surprised.

The stopover was well spent. The boat has gotten a thorough lookover. Chiefly  the INMARSAT has been restored to S1A1 shape thanks to some quick help from the naval ship repair yard and the wind vane autopilot has gotten a quick calibration.

Most importantly, we have our team Tees in hand and that should make us all uniformly handsome. The logo has come out better than expected and I did not miss the loud "wows" of the crew when they wore it the first time.

As of now its two more days to pass on shore. The next voyage presents a particularly difficult sailing condition. Predicted winds are nowhere more than ten knots at best. Opposing currents make the news bleaker. It is going to be a test of my lightwind sailing skills and the very conservative 120 miles a day I had planned the voyage with will be difficult to achieve. Throw in the equatorial heat, traffic around Dondra head and a green crew, we seem to be in for another interesting voyage.
Posted by Abhilash Tomy at 12:12 PM No comments:

<p>At about ten in the morning of the 23rd we cast off from our spot under Mt Dilli. The crew was in by half past nine and all that stopped us from sailing out was the approval to sail which too came at the appointed hour.</p>
<p>About half an hour after leaving our berth I decided to check on the engine and realised that the leak at the flange of the sea water cooling pump had worsened warranting me to shut off the engine in almost nil winds to affect repairs. I used a sealant that would do the job in a couple of hours. In the meantime rather than drift aimlessly I decided to train the crew in rigging and handling the gennekar. </p>
<p>It turned out to be a wise decision. Not only did the crew put the gennekar up for the first time, the boat also picked up some unexpected speed. Soon sea breeze picked up and we forgot all about the engine. By noon we were pacing south easterly towards our destination at nothing less than eight knots. The crew too enjoyed the feel of speed and silence of a trailing propeller.</p>
<p>It had been an interesting stopover at INA. While I had planned the the stop with the aim of giving exposure to cadets by taking them out sailing the ground reality that I faced when i reached had been quite different.</p>
<p>The hexagonal meet was in full swing and those who were not busy competing were away on their mid term hike. I did nothing for the first two days other than go swimming and re anchor after the anchor dragged once. I did go out to meet Cdr Mahesh and witness the triangular regatta and ended up seeing a very impressively built Naval academy. I had hoped to call on the commandant but both he and his deputy had their hand's full and they did not give appointment.</p>
<p>There were a few known names in the base although I could not meet any. Cdr Bagchi and Kohli were among them. In turn I ran into Capt Patil who was Cdr Ops in Hansa and is now serving under Cmde Azad in Bangalore.</p>
<p>On the last day INA asked me to take the commandant of NDA out sailing to which I gladly agreed. He had in tow a Commodore, a Captain and a Colonel along with ladies. Lt General Jatinder singh seems to have thoroughly enjoyed the sail for I was later told that it took a lot if effort to pluck him out of the boat. He was replaced with 18 cadets of NDA, NEC and INA- a bunch that turned out to be inquisitive beyond any measure. They too enjoyed the sail- or so I could make out from their faces. 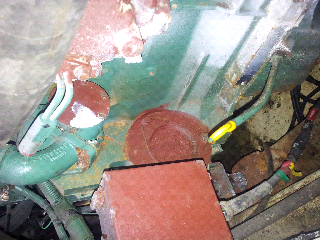 Posted by Abhilash Tomy at 6:42 AM No comments:

We came to anchor in about six metres of water right under the nose of Mt Dilli.

A Gemini from the boat pool carried my crew away and I was left all alone to myself. The anchorage promised to be pleasant as it did turn out and the stay has been comfortable. It was cool in the evening's dying sea breeze and by day I hope the Bimini to give me comfort.

I invited officers of a Coast Guard ship that had anchored nearby and they came over attracted as much by curiosity as by an uninspired evening. They seemed to have liked the few minutes they spent onboard for they merrily shot pictures and left packets of biscuits in return for my hospitality.

What does the day have in store? I don't care. Neither do I want to know. For all I care I don't mind spending the rest of my life here in the boat, at anchorage, under Mt Dilli.

Posted by Abhilash Tomy at 7:36 PM No comments:

It had been a hectic couple of days. As is the wont the Navy made available money for the voyage in such a manner that I had only two days to prepare. I did as best as I could which meant that I had to do the running around myself  because of a crew that had no experience in such matters. Things did fall in place by the end of the second day although there were minor glitches. The inmarsat terminal refused to work and along with it the   primary lapotop of the boat too knocked off. I think I will have then bith checked at cochin where I will be halting for a lli Ger duration.

We cast off by about half past four in the evening after a brief farewell over tea and snacks. We were seen off by Adm Hari Kumar, Commandant of the Naval College of Warfare and a host of families from Mandovi.

As we left harbour, we sailed into a dying sea breeze that had shifted north westwards and by the time I had the main sail up we were as close to Aguada as we could ever get. The dying breaze shifted to the right and we shaped a course seaward, so much so that  by midnight we were forty miles out and robbed of any wind.

We have either been motoring or motor sailing ever since and should make it to INA by evening today.

Posted by Abhilash Tomy at 12:10 AM No comments: